Sean Reagan is the youngest son of Danny and Linda Reagan.

Sean is the youngest of the Reagan grandchildren. He was once involved in a serious bike accident which resulted in bruising to the brain and Sean falling into a coma for over twenty four hours[1]. Like all Reagans, he attends Catholic school and has generally remained out of serious trouble. Lately he has acted out a bit, due in part to Jack heading off to college. He let his grades slip, got into a fight at school, cut classes and was caught drinking. He used Eddie's courtesy card to get off on the drinking, trying to stay off the family radar, but later confessed to his father[2].

Like his brother, he participates in many sports including soccer, lacrosse, football, and baseball. Recently his request for a basketball hoop at their new house was granted, although he had to push Danny to get it.

Once upon a time, he expressed a desire to be a fireman because they have cool uniforms, but has not given a specific career path he intends to pursue.

Sean is a lot like Danny, willing to say or do whatever, especially around family. He has typically stayed out of trouble and done well in school.

As of yet, Sean has not been shown to have dated. 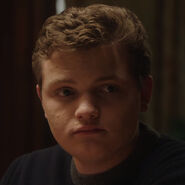 Retrieved from "https://bluebloodstv.fandom.com/wiki/Sean_Reagan?oldid=15999"
Community content is available under CC-BY-SA unless otherwise noted.