Nicole "Nicky" Reagan-Boyle is the only child of Erin Reagan and Jack Boyle. Nicky is a generally well-behaved and an intelligent girl who dresses, and typically behaves with more maturity than her classmates. She is being raised by her mother Erin, because her father did not want to share custody of her.

Nicky graduated from Columbia University, her mother's alma mater, at the end of season eight.

The second oldest of the Reagan grandchildren, similar to her mother, she is the only female grandchild. Nicky is a well behaved young woman, though there have been times where following her heart has led to her clashing with authority figures. While she resented being treated like a child longer than many of her classmates, she showed understanding that, as a Reagan, expectations of her were different.

Similar to the rest of the Reagan family, she attended Catholic schools, notably the Blessed Heart Academy for high school. Nicky considered college out of state until she considered the cost and distance of attending such a college. Nicky decided to attend Columbia University, partly because she had a friend who had an apartment close to campus, which she could share with the friend to save money.

In her early teens, Nicky announced she wanted to be the first female Reagan officer. From time to time she wavered on her conviction to follow her family in law enforcement, classifying herself as the bleeding heart hippie of the family. In The Brave, she decides to take the police exam.

In season six, Nicky is nineteen years old when Thomas Wilder kidnaps her.

In The Brave, Nicky tells Frank she is planning to take the police exam.

In season six, her relationship to an NYPD officer is revealed after her boyfriend is involved in an incident. It is revealed when Nicky's uncle Jamie and his partner arrive to a scene to offer assistance to other officers, for a suspect reported to be brandishing a machete. 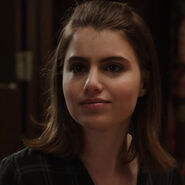