My Aim is True

Linda Reagan was the wife of Daniel Reagan, and the mother of Jack and Sean Reagan. She was an emergency room nurse at St. Victor's hospital in NYC. Linda died in a helicopter crash (off-screen) on May 28, 2017.

It is heavily implied Linda grew up in Staten Island and lived there until her death[1][2]. Linda and Danny met in high school where she was the "pretty Italian girl" that every Irish guy fell in love with[3]. She graduated top of her class in nursing school. Linda worked ten years at King's General hospital before taking time off to be a stay at home mother[4]. She began working part-time at St. Victors when money became an issue for the family[5]. Linda always had an opinion during Sunday dinners and was not afraid to share it, especially among family.

Although she loved Danny, his work was ocassionally a source of tension between them, especially when she felt Danny put more importance on his job than the family. Although there are times she wished he stayed in construction, she knew Danny loved his job too much to try to make him quit. Once Linda began working part-time, her job provided an extra source of income for the family, along with a reliable medical contact. While she helped with cases, she stood by her role as a medical professional and would restrict access to a patient, if necessary. Earlier during the series, her presence saved Henry's life when he had a heart attack while preparing Thanksgiving dinner.

One night while working at a mobile clinic outside the Jefferson Housing Complex, she was mugged at knife point. This situation prompted Linda to obtain a firearm license, even though she disliked firearms[6]. When she heard the process to obtain a firearm license would take a few weeks, she used Frank's courtesy card to expedite the process. When Linda obtained a firearm license, she bought a revolver. After spotting her mugger again, Linda wrestled with what to do before deciding to call 911 to report the mugger. Linda turned her revolver over to Danny and lied to him, stating it wasn't her.

While working at St. Victor's hospital, one of her patients was a witness in the shooting of NYPD Assistant Chief Donald Kent. A coworker's son was coerced by a gang into carrying out a hit on the patient's life. In the process, Linda was shot twice. One bullet was removed, however the other bullet was impossible to take out without killing her. Afterwards Linda met a therapist as the incident caused post-traumatic stress to her.

Linda and Danny were presumably married in early fall of 1996. Though their relationship was tense at times, they stayed married until her death in 2017. Linda and Danny were married for approximately twenty years and some months. When Jack starts dating[7], it is revealed Danny and Linda's second date was at an ice rink, and her favorite chocolates are Stork's Orange Cream's. Her exact age is unknown at this time.

Linda was married to childhood sweetheart, Daniel Reagan. She has two sons with Danny, Jack Reagan and Sean Reagan.

Linda kept her hair dyed blonde, although her eyebrows and roots hinted at a darker color. After season one she typically kept her hair shorter than her shoulders until season seven. Her eyes are light blue. She is 5'6" (167cm).

Linda originally drove a red Ford Freestar minivan, plates TNQ-8930. Later during the series, she had a blue minivan which had an electrical problem, causing it to catch fire on her way to work. After the incident with the blue minivan, Linda and Danny are loaned Henry's old vehicle, which appeared to be an Oldsmobile Cutlass Supreme. Linda and Danny used the minivan's plates for Henry's vehicle.

She briefly had a revolver. 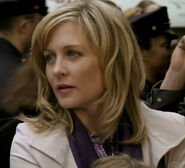 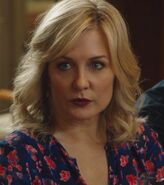 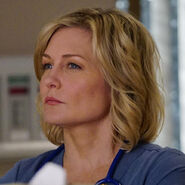