Jameson “Jamie” Reagan is a Sergeant in the New York City Police Department. He serves at the 29th Precinct. Jamie is the youngest child of Francis and Mary Reagan. Known for having a good heart and being the ‘Golden Boy’ of the family, it is hinted he got in the least trouble as a kid. He never went to jail until he started a fight at a wedding. Jamie has good instincts as a cop, despite having gone to school to be a lawyer. Over time he wavered from his strict lawyer viewpoint and now views things as a cop.

As the youngest of the Reagan clan, Jamie was babied in many aspects, especially by his mother who did not want him to go into law enforcement like the rest of the Reagan men. One bad habit he had when he was young was swallowing things such as Danny’s liberty head dimes, Erin’s confirmation locket, the key to the liquor cabinet and a pair of Mary’s pearl earrings[1]. An excellent student, he went on to Harvard where he studied law and graduated and received a position at a local law firm before Joe’s death inspired him to follow his heart and enter the NYPD police academy.

After giving up his promising law career, Jamie entered the police academy and graduated top of his class. He was assigned to the 12th Precinct where he was guided by Sergeant Anthony Renzulli. During their partnership, Sergeant Renzulli mentioned to Jamie he could be a great cop as long as he didn’t adopt Danny's bad habits. On several occasions, Sergeant Renzulli challenged Jamie to think more like a cop (notably the hot-dog costume-wearing drug dealer). Partnered for two years, they became close and Jamie even went so far as to ask Frank for money to help Renzulli out. Jamie and Danny often see each other at crime scenes. The first body Jamie saw was shown to him by Danny, a fact he later lamented to Erin.

At their first meeting, Jamie and Vinny didn't know they were partners. Vinny's first impression rubbed Jamie the wrong way. Over time they managed to work out their differences, however not before having a disagreement over a young suspect. Although Jamie disagreed with Officer Cruz's interpretation of the boy throwing gang signs, he stuck with Officer Cruz's interpretation. After the situation with the young suspect ended, Jamie laid out a few ground rules to Officer Cruz to make sure they didn’t end up in a similar situation again. After a man committed suicide through Jamie, he requested Detective Reagan discover why the man wanted an officer to shoot him. While investigating the case with Detective Reagan, Jamie helped Detective Reagan solve an old hit and run case. When everyone in the 12th Precinct was hunting for Pedro Mendoza, Jamie and Officer Cruz had several close calls due to Officer Cruz's resemblance to the suspect. When violence in the Bitterman Housing Complex escalated, Officer Cruz was shot and killed when he was ambushed with Jamie.

Upon meeting his newest partner, Jamie was shocked to realize he was assigned to a rookie, Edit Janko. While their partnership started off smoother than Jamie's other partnerships, there were a few rocky moments between Jamie and Officer Janko. Particularly when Jamie’s support of her didn't match up with what she thought he was supposed to do. However, they worked through those situations each time. Overall, they supported each other the best they could without crossing the line into romance and without lying. They spent a lot of time with each other outside of work, finding they enjoyed spending time with each other.

Jamie is shown to be open-minded and easygoing.

Sydney Davenport was Jamie’s fiancée until she wasn't able to handle the realities of his risky job. After she gave him back the engagement ring, she took a job in London for at least six months. The engagement ring was the ring of Jamie's mother and he returned it to Frank when the engagement ended. Since his relationship with Sydney, Jamie didn’t have any serious relationships, although he dated. Jamie later told Eddie, Sydney preferred saying "my fiancé the lawyer" to "my fiancé the beat cop".

Jamie is married to Edit Janko-Reagan. For around 5 years, they tried to not act on their mutual attraction, wanting to remain partners. Despite this, there were several times they were more than partners and the 12th Precinct already assumed they were a couple. Although Jamie calls Eddie bossy and makes fun of her eating habits, it’s his way of expressing how much he loves her.

Jamie has light brown hair and hazel/green eyes. He's 5'8 1/2" (173cm), making him the shortest of the Reagan siblings by over an inch. He keeps in shape via boxing, sports and chasing down suspects. 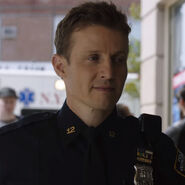 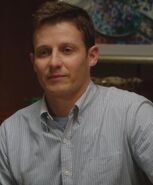