218
Francis "Frank" Xavier Reagan is the current NYPD police commissioner and the de facto patriarch of the Regan family. He is the son of former Police Commissioner Henry Reagan and is a widower. Frank has four children: Danny, Erin, Joe, and Jamie. Unfortunately, Joe was killed in the line of duty. Currently, he has four grandchildren: Nicky, Jack, Sean, and Joe. While he loves the NYPD and his work as the police commissioner, occasionally he finds himself questioning whether or not he still wants the job.

Despite currently being commissioner, he has had prior experience on patrol and as a detective and is not afraid to use this to do his own investigations into circumstances surrounding current events. Frank often uncovers new information this way, which lets him draw decisive conclusions about the best course of action. While mindful of others their position in life, he also has a prudent and steadfast approach to resolving disputes, both at work and at home.

Frank is the younger son of Henry and Betty Reagan, born in Bay Ridge, Brooklyn, New York. He had an older brother, Peter Christopher Reagan, who died of leukemia at the age of 18 months over a year before Frank was born, resulting in Frank growing up an only child.

Each of Frank's sons followed him into the NYPD: Danny is a Detective 1st Grade and lead investigator with the 54th Precinct's Detective Squad; Joe was a Detective with the Warrants Squad who was murdered on the orders of his partner Sonny Malevsky, the leader of a corrupt gang of police officers called the Blue Templar; and Jamie is a Sergeant assigned to the 29th Precinct with a law degree from Harvard University. Frank's only daughter, Erin, is also in law enforcement as a Manhattan Assistant District Attorney. Erin was promoted to Deputy Bureau Chief of the NYC DA's Trial Bureau in 2013 and later Bureau Chief in 2018.

In addition to his children, Frank is also a loving grandfather to Erin's daughter, Nicky Reagan-Boyle, and Danny's two children, Jack and Sean Reagan. It's revealed in Season 10's "Family Secrets" that Frank also has one more grandson, Joseph "Joe" Hill, the son of Paula Hill, whom Joe Reagan met at the academy. Paula said the two had a brief affair and she never told Joe about his son. Paula visits Frank and reveals the news in an effort to get her son, who is now a young detective in the firearms unit, assigned to a less dangerous precinct. In one episode, it is mentioned that Frank's wife's grandfather was one of the builders on the Brooklyn Bridge in the 1870s and '80s. Frank's grandfather, Charles Reagan, was an Irish immigrant who served in World War I before becoming a police officer. Charles was the one who taught Frank how to fish. In "Whistle Blower" (season 2, episode 10), Frank mentions his great-uncle Teddy Reagan, a member of the NYPD Mounted Unit, who spent a cold night in a boxcar with his horse, Dolly, and woke up in Pittsburgh.

Prior to becoming the Reagan family's third-generation police officer, he served as a first lieutenant in the U.S. Marine Corps, during the Vietnam War. He was awarded the Navy & Marine Corps Achievement Medal during his military service. He began his NYPD career as a patrol officer stationed at the 27th Precinct. After three years on patrol, he was promoted to Detective 3rd Grade. Since then, he has served in various positions across the city, culminating in being appointed Police Commissioner. Additionally, Frank had also made friends with many other cops throughout his service, which include Lenny Ross, Donald Kent, Chris Scanlon, and many others.

In June of 1982, Frank was able to end a war between two crime bosses in China Town. Frank as well as his fellow officers were excited. While Henry said he was "more than a little bit stung" for Frank not mentioning it, he admitted he was proud as well.

In August of 1986, Frank and his partner at the time Jerry responded to a call about a woman being assaulted by a thief who smashed her face into a sidewalk, stole her watch and purse, and ran off. When Frank and Jerry arrived, they caught up to and apprehended the thief. However, two other criminals waiting in a parked car came out. Frank and Jerry were caught in a shoot out. While Jerry managed to hit one of them, the other got away. However, the criminal who was shot died on the scene and his gun was never recovered. While Frank said it was a "questionable shooting" and even testified to it, Frank also confirmed that the grand jury at the time declared the incident a "justifiable homicide".

Sometime in 1988, Frank was able to apprehend a bank robber all by himself before back up had arrived on the scene. Henry stated that was a clear case for the Medal for Valor. However, while Henry never gave Frank a medal or commendation bar during his time as commissioner to avoid favoritism, Henry admits it was the one time he regretted that decision.

From 1995 to 1999, Frank was the commanding officer of the Special Investigations Unit, a special anti-narcotics task force. Among the men hand selected was William J. "Billy" Flood, described as one of the best men in the unit.

On September 11, 2001, Frank was among the many police officers working in the North Tower when the South Tower collapsed. He spent days at Ground Zero and took refuge at St. Paul's Chapel, where he and other officers slept in the pews.

On September 24, 2010, Frank was appointed the police commissioner by Mayor Frank Russo. In 2011, after the election of Carter Poole (David Ramsey), Frank offers to tender his resignation, but Poole decided to keep Frank on as PC. In 2015, after Mayor Poole's successful reelection, Frank struggles with whether he even wants to stay on for another four years as PC, assuming the Mayor even asks him to. He ultimately decides to stay for "as long as the Mayor's head is in his ass" (which was remarked as indefinitely). The Mayor officially asked Frank to re-up in February 2016 and he agrees.

Frank has an indifferent attitude towards politics, often taking on the mayor and numerous reporters who misinterpret his actions. He tries hard not to judge people and tends to purse his lips together when hearing bad news or the horrific details of an ongoing case. He also refuses to play favorites; in season 4, he mentions that he is afraid to recommend Jamie, now with four years on the force, for promotion to Detective because it would look like nepotism.

One of Frank's predecessors, "Crooked" Commissioner Connors, served time in federal prison after his term as PC was completed and left him with more than one mess to clean up, including Officer Thomas Sculley, one of four patrol officers who, a few months after 9/11, accidentally shot an unarmed Muslim teenager, and was acquitted of all charges and allowed by then-Commissioner Connors to keep his job. In 2016, Officer Sculley, who had kept his head down for the last 14 years and made great strides to atone for his horrible rookie mistake, passed the Sergeant's exam with flying colors. Frank was reluctant to promote him, lest tensions between the citizens and the police grow even worse and ultimately offered Officer Sculley a choice: transfer to another city (Long Island, Albuquerque, New Mexico, Boulder, Colorado, or San Diego were among the departments Frank talked to) or take his promotion to Sergeant and ride a desk at the NYPD Erie Basin Auto Pound in Brooklyn for the rest of his career.

However, by season 6, public opinion regarding the police has changed so drastically that he was once booed off-stage while speaking at Columbia University. Frank was nearly served with a vote of no confidence by the NYPD rank and file in 2012 when he publicly apologized for the accidental shooting of a black man by a rookie patrol officer instead of waiting for the official report.

In spit of all of the challenges he has faced throughout his career, Frank continues to enjoy higher public opinion polls than any of the mayors he has served under.

Although Frank is no longer an NYPD police officer due to his appointment as commissioner, he continues to wear his dress uniform and shield to very special events: i.e. academy graduations, officer funerals, didications, etc. 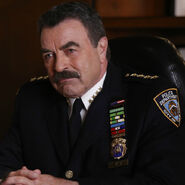 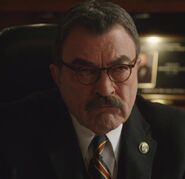 Retrieved from "https://bluebloodstv.fandom.com/wiki/Francis_Xavier_Reagan?oldid=17615"
Community content is available under CC-BY-SA unless otherwise noted.