Edit "Eddie" Marie Reagan (Neè: Janko) is a police officer for the City of New York. The week after her graduation from the Academy in 2013, she was partnered with Jamie Reagan out of the 12th Precinct until his promotion to Sergeant and transfer to the 29th Precinct. She was later also transferred to the 29th at Jamie's request.

After getting married, she tried out hyphenating her name before ultimately deciding on being Officer Janko at work and Mrs. Reagan at home[2].

Admittedly a sheltered, happy kid, Eddie is of mixed Serbian and Hungarian descent and speaks Serbian fluently due to her mother. Growing up, her father’s position as financial advisor meant they were very privileged to the degree that her high school graduation present was a Porsche. When it was revealed that the company her father worked for was a Ponzi scheme, costing many people everything, she got angry at him and didn’t speak to him for years after his conviction. While at Fort Dix her father was attacked by corrupt corrections officers and beaten badly enough to end up in the hospital. Once he finally agreed to testify against them, she was willing to try to repair their relationship.

In season 4 episode 8, Eddie goes on a date that ends badly. After getting drinks with a guy from her yoga class, he walks her home. when they get to her apartment he wants to come in and she says no. He then pushes her inside and slams her into a lamp. the next day Jamie comes to her apartment and asks Eddie to open the door because he feels like something is not right. When Eddie opens the door Jamie asks what happened, she claims she got into a car accident but he doesn't believe her. At work the following day Jamie gets the guys number out of Eddie's phone and writes it down. When he looks it up he finds that the guy has already been charged with rape in the first degree.

Eddie’s time on the job started dramatically with the death of a fellow officer. Not long after, she was put in a highly stressful situation when a suspect she was chasing attempted to strike her with a pipe. During her recitation of the resulting arrest, she was shown to have a critical fact wrong but refused to change her story, wholeheartedly believing her account to be correct. While she was not actually correct, she kept her job when the investigation concluded that stress and adrenaline affected her memory of the incident, tricking her mind into believing her version of the story.

At one point she is temporarily assigned a different partner so that Jamie can ride with Officer Walsh who she believed hung her previous partner out to dry. Angry at what she sees as a betrayal of one of their own she makes several disparaging remarks. Later, after Officer Walsh is shot while watching her back Eddie begins to see her as a good cop who was in a bad situation.

Partnered once again, they faced a new threat when Jamie was attacked by a murder victim’s jealous ex-boyfriend and when they come face to face with him in the precinct, Eddie loses her cool. Her protective comments make her the target of an abduction by the suspect but due to the combined efforts of Danny, Jamie and Baez she is rescued just in time.

Her next trial comes when a civilian patrolman, Andy Fisher’s interference results in her killing a cornered suspect. Though not her first shooting as an officer, the loss of life at her hand hits Eddie hard causing her to lose her temper, telling Andy that it was his fault. She ends up going home sick when it overwhelms her but Jamie drops by that night giving her the support and comfort she needed.

Things quickly get intense with Eddie trying to help a confused older woman remember details about a potential bomber before he can strike.

Then, due to her age and fluency in Serbian, Danny asks Eddie to help them out with a case involving missing Serbian girls by going undercover. Although Jamie is not happy with her decision to accept the assignment, he ends up giving her the best advice because of his own experience undercover.

When a reporter riding along with them is shot and then withholds information, Jamie and Eddie approach him off-shift to try to get the full story out of him but are frustrated when he is still more interested in his story than getting the attacker.

They find that not all victims are easily helped when a mentally unstable woman ends up on their radar and their efforts to get her additional help are largely fruitless.

During a demonstration, Jamie is accused of brutality and Eddie is unable to provide testimony that will clear him while remaining truthful, stressing their relationship. They pull together to the point Jamie almost starts a war between the department and the District Attorney’s office when Eddie is charged with misconduct over making a few parking tickets disappear for an elderly neighbor. When Eddie gets overly excited by the prospect of doing detective work and ignores a 10-13, Jamie snaps at her once again feeling that she is damaging their trust.

After Jamie is promoted to Sergeant, Eddie follows him to the 29th Precinct, though initially she did not intend to, wanting to find her identity. There she gains a new partner while concealing their engagement as best she can. Though typically one half of a dating or married couple would be reassigned to a new precinct, they find a loophole in that the rules do not specifically state they have to be stationed at separate precincts.

While her only long-term partner has been Jamie, from time to time she has temporarily been assigned to other partners

Feisty, independent, and difficult to offend, Eddie is passionate about what she believes in and far more hot-tempered than Jamie. On the job, she usually sees things in an ‘Us vs. Them’ way, but is open to hearing Jamie’s more neutral assessment, even if she disagrees with it. Her massive appetite is the source of much ribbing from Jamie, especially due to her love of fried food and all-you-can-eat nights.

While they have always shown signs of attraction to one another, Eddie and Jamie have worked to keep it professional, even after a night of drinking resulted in a kiss. Regardless of their effort to keep it strictly work between them, many of their fellow officers and, to an extent, even Jamie's family think they are sleeping together and they have been questioned on the nature of their relationship several times. From season 4 to 8, since they were not actually a couple, Eddie continued dating off and on. Early in their partnership, Eddie ended up on a date with a man who sexually assaulted her. Unwilling to be seen as a victim in her own precinct, she refused to report it, but with Jamie’s support, she finally did and she thanked him for his encouragement.

In season 7 episode 8, Eddie goes over to Jamie's apartment and confesses she is jealous and has feelings for him. He admits he has feelings for her, too. However, they agree that feelings can screw up a partnership and neither of them wants that to happen.

Eventually, after a near-fatal shoot out, they skip the dating and jump straight to engagement when Jamie is almost assassinated. Afterward, they have to convince everyone that they can work together, which doesn't work as well as hoped. However, a loophole allows them to stay at the same precinct, just not as partners. 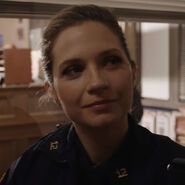 Retrieved from "https://bluebloodstv.fandom.com/wiki/Edit_Marie_Reagan?oldid=15880"
Community content is available under CC-BY-SA unless otherwise noted.