Danny Reagan is the oldest child of Frank and Mary Reagan, as well as the older brother of Erin, Joe and Jamie. Danny is an investigator of New York City's 54th Precinct’s Detective Squad, specializing in Major Crimes, and doing what needs to be done to serve justice in the fight against crime.

Danny and his siblings grew up in Bay Ridge, Brooklyn. He was happily married to Linda from 1996-2017, and they have two sons, Jack and Sean. They lived in Staten Island, at 1712 Ambrose Road until the house was firebombed. During high school, he dated Marianne Romano, who was described by his partner Maria Baez as “the queen bee, super good looking, a little crazy, and dynamite in the sack” to which he agreed. As a young man, Danny and Walter Harrison Beene worked construction.

For a class project of Nicky’s, Danny mentioned that when he was three, he wanted to be a fireman for Halloween, but his grandfather Henry swore that as long as he was alive, no Reagan would ever be a member of the New York City Fire Department. Henry then got him into a police uniform, and he “never took it off” until he made Detective.

Danny is a tireless worker and a highly skilled detective with keen instincts and years of experience who firmly believes that good old-fashioned police work is the best strategy to utilize when trying to catch a suspect. He has made more collars than any other detective in his precinct. His hard-nosed nature and short temper often exacerbates the situations and causes him to go above and beyond the rules to close cases by taking advantage of his power, and he has a tendency to act brutal towards the criminals he collars, a tactic that is almost criminal itself, - which, in turn, makes it harder to bring a clear case against them in court, and sometimes gets him suspended. For example, in one episode he held a suspect over the edge of a building and threatened to let him fall if the suspect didn't "come clean". Danny's old-school, authoritarian style clashes with those of his more moderate, fair siblings Jamie and (even more so) Erin. It also occasionally causes rifts between him and Linda, who becomes concerned and angry when Danny becomes unwilling to drop certain cases.

However, above all Danny is devoted to his family; many of the situations in which he most significantly loses his temper are when others have threatened his siblings, wife or children. Despite his gruff and aggressive nature, Danny is quick to sympathize with others and easily talked into action or taking on a case, regardless of circumstances. Outwardly he is self-assured to the point of arrogance and quick to assert his authority, yet Danny has been shown to be insecure and self-doubting, referring to himself as just a grunt on one notable occasion. He was close with his late brother, Joe.

Danny is 5'10" (177cm)[1][2], approximately 160lbs (72.5kg)[3], and physically fit with hazel eyes. In most lighting his hair is brown. He has a pronounced widows peak and prefers to keep his hair cut very short. While most of the family are right handed, Danny has the distinction of being a lefty.

Danny has two tattoos: Semper Fi over his heart, and a faded emblem on his shoulder.[4]

On the job for 15 years (as of season 1), Danny took a leave of absence from the New York City Police Department to serve two tours in the Iraq War as a Marine. Danny saw combat in Fallujah, and was the only member of his platoon to come home alive (resulting in some post-traumatic stress). During his time in the Marines, Danny was decorated for heroism.

He is old-school; his hotheadedness and harsh methods of detective work sometimes get him in trouble, which his father worries about. When asked if his son “crosses the line” and violates procedure from time to time, Frank answered, “I think he walks on the line.” Danny is hard on other policemen and detectives when he feels they are unprofessional or not doing their duty to its utmost. He is currently assigned to the Detective Squad of the 54th Precinct and partnered with Det. Maria Baez. It is mentioned that he leads the Manhattan South Detective Borough in both collars and complaints[5]. In “Love Stories”, he and Baez are awarded the NYPD Medal for Valor for their actions in “Partners”.

Throughout season 6, he was taunted by Thomas Wilder who murdered and raped over twenty young women (ages 18-22). In the finale, Danny rescued his niece, Nicky Reagan-Boyle, who was kidnapped from her dorm and eventually left in the trunk of Thomas' car. In the end, Danny shot and fatally killed Thomas. At the beginning of season seven, he was investigated for his actions in the investigation into Thomas Wilder and was cleared of wrong-doing.

After being investigated Danny fails his next sexually assaulted victim. His sister, Erin, points out after a family dinner that he has changed. He admits that after several internal investigations that he didn't need to get investigated again. He later goes back to the victim and asks her to attempt to set up her ex-boyfriend to incriminate himself.

Over his career, Danny has had numerous partners to the point even he acknowledges that he burns through partners and gets very protective of the ones who stick around.

Originally he drove an eighth generation (model year 2000-2005) blue Chevy Impala, plates ANO-2594 which changed to ANO-2595 between Episodes 10 and 11 of Season 2. Between Seasons 3 and 4 their assigned car changes to a new model grey Dodge Charger, plates NUQ-1724. 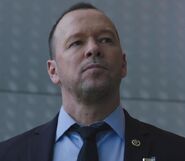 Retrieved from "https://bluebloodstv.fandom.com/wiki/Daniel_Fitzgerald_Reagan?oldid=15887"
Community content is available under CC-BY-SA unless otherwise noted.